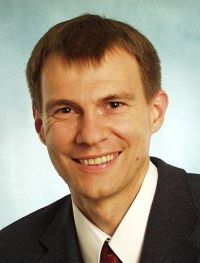 Professor Norbert Randl is full professor for Concrete and Steel Structures at the School of Civil Engineering and Architecture (CUAS) and head of the structural concrete laboratory. He studied Civil Engineering at the Faculty of Civil Engineering, University of Innsbruck, Austria, and received his Ph.D. in Civil Engineering in 1997. The topic of his thesis was “Investigations on load transfer between old and new concrete at different interface roughness“. Until 2000 he worked with Prof. Wicke as research assistant at the Institute for Concrete Structures, University of Innsbruck. After a period working as a consulting engineer in a design office in Innsbruck, he moved to the Hilti Corporation in Germany, and engaged in the development of fastening and strengthening techniques until he received the call to CUAS in 2007. His main fields of research include analysis, testing and design of UHPC and HSC members, strengthening of RC members, and behavior and design of fastening systems and post-installed reinforcing bars. Prof. Norbert Randl is an active member of several fib Commissions and Task Groups as well as CEN working groups and contributed to Model Code 2010 sections on concrete-concrete interface shear transfer.

This site uses cookies to provide services at the highest level. By continuing to use the site, you agree to their use. AgreeRefuse